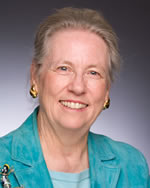 Mrs. LaMacchia was a director of the Friends of the Public Library from 1988–1998, and a book sale volunteer since 1984. She also served as the Book Sale Co-chair from 1987–1998, overseeing the seven used book sales conducted by the Friends each year, including the annual five-day tent sale on Fountain Square. Under her leadership, over $800,000 was raised to support the Library through the sale of more than 2 million used books.

A graduate of Catholic University of America with a BA in Biology, she received her master’s degree in Microbiology from the University of Maryland. Since moving to Cincinnati in 1983, she has been a member of the Girl Scouts of Western Ohio, serving in various capacities as troop leader, neighborhood director, board member, and fundraiser. Mrs. LaMacchia has also been the Capital Campaign Chair for the Friends of the College Conservatory of Music, a member of the Cincinnati Zoo Board of Trustees, and has served on the Board of Trustees for the Civic Garden Center of Greater Cincinnati and on the Board of Pendleton Heritage Center in the East End.

She has chaired numerous fundraisers in the past, including the Ohio Cancer Research Association, and was awarded the Philanthropic Award for Girls Scouts (1992), Girl Scout Distinguished Woman Award (1994), Philanthropic Award for Cincinnati Conservatory of Music (1995), and Finalist in the Post-Corbett Award for Individuals (1997). In 1998 she also received awards from the Cincinnati Zoo and the Civic Garden Center, and is a member of the Olave Baden-Powell Society. She was named an Enquirer Woman of the Year in 1998 and received a Celebrating a Century of Service award from the Girl Scouts in 2012.

Mrs. LaMacchia is a resident of Indian Hill.