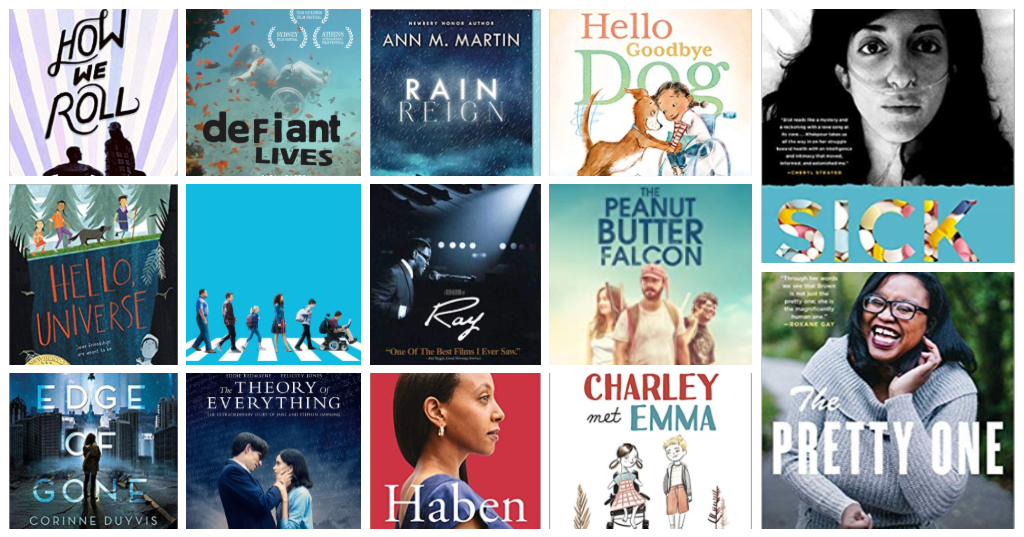 December 3 is International Day of People with Disabilities – first established in 1992 by the United Nations. Here at the Library, we recognize the importance of equitable access and visibility for all of our county’s citizens.

While we are working hard on ensuring that all of our locations are welcome and easy-to-access spaces for all as we embark on our Building the Next Generation Library, opens a new window initiative, our collection has a variety of materials featuring people with both visible and invisible disabilities.

We hope that, whether you identify as part of this community or not, you browse through these materials, and others like them, to learn about and de-stigmatize disabilities. As disability justice activist Mia Mingus underscores, “I am not something to be fixed or cured or erased or hidden away. I am not a burden or tragic or something to take pity on.”

What could be better than a book about a dog who loves books and hates goodbyes? Moose, an energetic mutt, hates it when Zara goes off in her wheelchair to school, so he insists on joining her—in the classroom, the library, and the cafeteria (the latter leads to a hilarious game of tag). What to do? Dog therapy school provides the answer, and Moose becomes an official reading buddy.

Virgil feels out of place in his crazy-about-sports family. Valencia is deaf, smart, and loves everything about nature. Kaori is a self-proclaimed psychic, whose little sister, Gen, is always following her around. And Chet wishes the weird kids would just stop being so different so that he can concentrate on basketball. They aren't friends. But when Chet pulls a prank that traps Virgil and his pet guinea pig at the bottom of a well, Kaori, Gen, and Valencia begin a quest to find the missing Virgil.

Written by Cincinnati author Amy Webb. When Charley goes to the playground and sees Emma, a girl with limb differences who gets around in a wheelchair, he doesn't know how to react at first. But after he and Emma start talking, he learns that different isn't bad, sad, or strange--different is just different, and different is great!

After developing alopecia Quinn lost her friends along with her hair and former football player Jake lost his legs and confidence after an accident. The two help each other believe in themselves and the possibility of love.

In Amsterdam, the Netherlands, in 2034, a comet is due to hit the Earth within the hour. Denise, who's sixteen years old and autistic, must try to find her missing sister and also help her neglectful, undependable mother safely aboard a spaceship.

Haben grew up spending summers with her family in the enchanting Eritrean city of Asmara. There, she discovered courage as she faced off against a bull she couldn't see, and found in herself an abiding strength as she absorbed her parents' harrowing experiences during Eritrea's thirty-year war with Ethiopia. Their refugee story inspired her to embark on a quest for knowledge, traveling the world in search of the secret to belonging.

Struggling with Asperger's, Rose shares a bond with her beloved dog, but when the dog goes missing during a storm, Rose is forced to confront the limits of her comfort levels, even if it means leaving her routines in order to search for her pet.

From a disability rights advocate and creator of the #DisabledAndCute viral campaign, a thoughtful, inspiring, and charming collection of essays exploring what it means to be black and disabled in a mostly able-bodied white America. Keah Brown loves herself, but that hadn't always been the case. Born with cerebral palsy, her greatest desire used to be normalcy and refuge from the steady stream of self-hate society strengthened inside her. But after years of introspection and reaching out to others in her community, she has reclaimed herself and changed her perspective.

For as long as author Porochista Khakpour can remember, she has been sick. For most of that time, she didn't know why. Several drug addictions, some major hospitalizations, and over $100,000 later, she finally had a diagnosis: late-stage Lyme disease. A story of survival, pain, and transformation, Sick candidly examines the colossal impact of illness on one woman's life by not just highlighting the failures of a broken medical system but by also boldly challenging our concept of illness narratives.

An adventure story set in the world of a modern Mark Twain that begins when Zak, a young man with Down syndrome, runs away from a nursing home where he lives to chase his dream of becoming a professional wrestler and attending the wrestling school of the Salt Water Redneck. Through circumstances beyond their control, Tyler, a small-time outlaw on the run, becomes Zak's unlikely coach and ally.

Ray Charles went blind at the age of seven. Inspired by his mother who insisted he make his own way, he found his calling at the keyboard. Ray follows as he overcomes drug addiction while becoming one of the country's most beloved performers.

Maya DiMeo is a mom on a mission who will do anything for her husband, Jimmy, and kids Ray, Dylan, and J.J., her eldest son with cerebral palsy. A single-camera comedy about a family with a special-needs teen that is good at dealing with the challenges he faces--and excellent at creating new ones.

Renowned astrophysicist Stephen Hawking fell deeply in love with fellow Cambridge student Jane Wilde. Once a healthy, active young man, Hawking received an earth-shattering diagnosis at 21 years of age. With Jane fighting tirelessly by his side, Stephen embarks on his most ambitious scientific work, studying the very thing he now has precious little of: time. Together, they defy impossible odds, breaking new ground in medicine and science.

A triumphant film that traces the origins of the world-wide disability rights movement. It tells the stories of the individuals who bravely put their lives on the line to create a better world where everyone is valued and can participate.