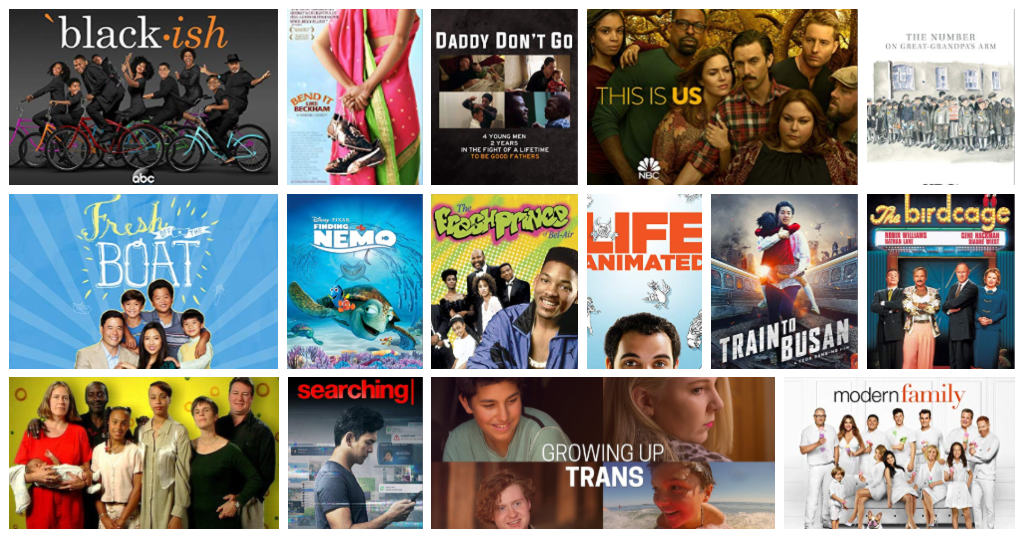 Father's Day is fast approaching. For some this day is a celebration of a beloved parent, caregiver, family member, or friend. For others, it can be a day filled with complicated emotions.

We've rounded up a few of our favorite movies, television shows, and documentaries that portray people who are fathers in just a few of the many ways fatherhood takes shape. Sometimes its completely outside the gender binary or who we traditionally think of when we think of fathers. Here, you'll find gay dads, divorced dads, trans dads, single dads, estranged dads, differently abled dads, granddads, stay-at-home dads, adoptive dads, foster dads, uncles who step in as dads, incarcerated dads, stepdads, and more.

However Father's Day is celebrated (or not) in your life, we hope you enjoy these suggestions. All are available to watch for free using your Library card.

The fretful Marlin and his young son, Nemo, become separated from each other in the Great Barrier Reef. Nemo, a clownfish, is unexpectedly taken from his home and thrust into a fish tank in a dentist's office overlooking Sydney Harbor. Buoyed by the companionship of a friendly fish named Dory, Marlin embarks on a dangerous trek and finds himself the unlikely hero. Rated: G

The story of a middle-aged gay couple's comic encounter with a self-righteously straight and conservative family: Armand and Albert reluctantly accept their son Val's intention to marry the daughter of a conservative senator, but when the fiancée's family comes to visit, the whole household is turned upside down. Rated: R

After David Kim's 16-year-old daughter goes missing, a local investigation is opened and a detective is assigned to the case. But 37 hours later and without a single lead, David decides to search the one place no one has looked yet, where all secrets are kept today: his daughter's laptop. David must trace his daughter's digital footprints before she disappears forever. Rated: PG-13

Eighteen-year-old Jesminder's father and mother want her to be a nice, conventional Indian girl. But she just wants to play soccer like her hero, David Beckham. For Jess, that means kicking a ball around the local park with the lads until she's spotted by Jules, who invites her to join the local women's team. Will she be able to earn her father’s support? Rated: PG-13

Sok-woo, a father with not much time for his daughter, Soo-ahn, are boarding the KTX, a fast train that will bring them from Seoul to Busan. But during their journey, the apocalypse begins, and most of the earth's population become flesh-craving zombies. While the KTX is shooting towards Busan, the passenger's fight for their families and lives against the zombies – and each other. Not Rated

Centered on a unique set of triplets, the story follows several decades in the lives of Jack and Rebecca Pearson. As the plot unfolds, it traverses numerous timelines and intertwines the stories of people whose lives connect in unexpected ways. Filled with memorable performances from its acclaimed cast, it is a smart, poignant dramedy that shows the many ways fathers impact families. Rated: TV-14

Will moves from the tough streets of West Philadelphia to posh Bel-Air to live with his Uncle Philip, Aunt Vivian, and his cousins. Though Will’s antics and upbringing contrast greatly with the upper-class lifestyle of his extended relatives, he soon finds himself right at home as a loved part of the family, with Uncle Phil as a father figure. Rated: TV-PG

Modern Family explores fatherhood in many forms. It’s a refreshing and funny view of what it means to raise a family in this hectic day and age. Multicultural relationships, adoption, and marriage equality are just a few of the timely issues faced by the show's three diverse broods. No matter the size or shape, family always comes first in this hilariously "modern" look at life, love, and laughter. Rated: TV-PG

Set in the mid-1990s, and inspired by a true story, this show stars Hudson Yang as 11-year-old, hip-hop-loving Eddie Huang, who, with his family and his optimistic and U.S.-obsessed dad, is adjusting to a new life in suburban Orlando. Faced with new schools, new friends, new neighbors, and new traditions, the Huangs stay true to their Taiwanese family values as they pursue the American Dream Rated: TV-PG

Andre "Dre" Johnson has it all...a job as a top ad exec, a beautiful doctor wife, four great kids, and a lovely, well-appointed house in the suburbs. And he's not about to let his family forget how they got there. Keeping cultural identity alive is not without its challenges for this man on a mission. With perpetual pushback from clueless coworkers, an outspoken father, and even the wife and kids, Dre's is forced to straddle two worlds and three generations but is determined to make his point. Rated: TV-PG

A coming-of-age story about a boy who couldn’t speak as a child until he discovered an unusual way to communicate by immersing himself in the world of Disney animated films. He and his family overcome life’s challenges, finding the language to express love, loss, and kinship. The documentary is based on the book written by Owen Suskind’s father, Pulitzer Prize-winning journalist, Ron Suskind. Rated: PG

This short documentary depicts a conversation between a boy and his great-grandfather, an Auschwitz survivor. It is woven with historical footage and animation to tell a heartbreaking story of Jewish life in Eastern Europe, sharing lessons from the Holocaust with a new generation. Rated: TV-PG

An intimate exploration of the struggles and choices facing transgender kids and their parents. Through moving, personal stories of children, parents, and doctors, the film examines new medical interventions increasingly being offered at younger ages to help people who are trans live as their authentic selves. Rated: TV-PG

With blunt and sometimes hilarious candor, the children in That’s A Family! take us on a tour through their lives and speak movingly about their unique family experiences, explaining what it's like to have been adopted, be raised by a guardian, have parents who are lesbian or gay, have a single mom or dad, parents of different races, and much more. Not Rated