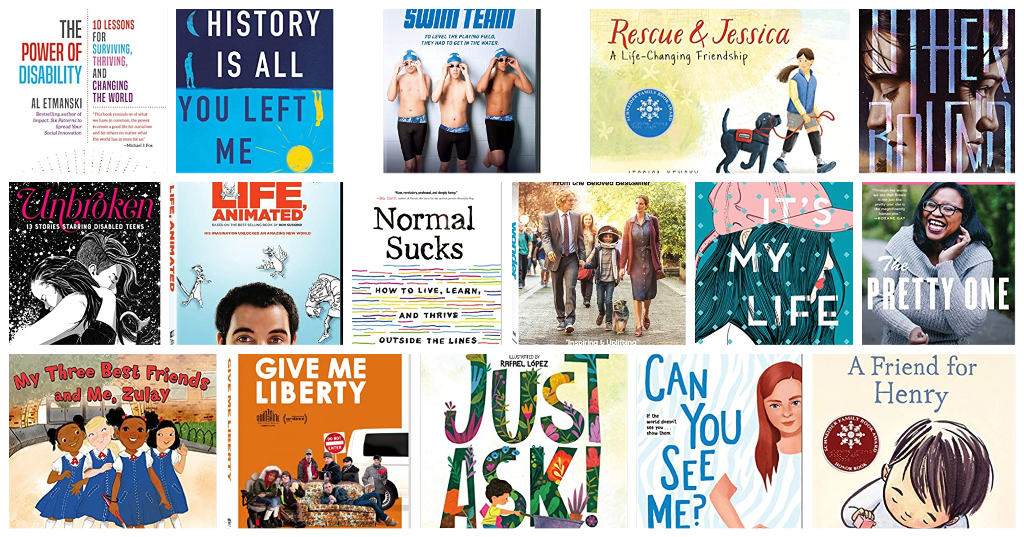 On July 26, 1990, the Americans with Disabilities Act (ADA) was signed into law. This year marks the 30th anniversary of this landmark legislation.

"Disability Pride is the idea that people with disabilities should be proud of their disabled identity,” states the National Council on Independent Living on their website. “People with disabilities are the largest and most diverse minority within the population, representing all abilities, ages, races, ethnicities, religions, and socio-economic backgrounds.”

Disability Pride centers acceptance and celebrates the uniqueness each individual brings to the world, recognizes the intersections of other identities and the challenges that can come with them, and honors the way it all contributes to the rich diversity of humanity.

To honor people with disabilities both visible and invisible, we gathered 20 Library resources perfect for all ages to commemorate Disability Pride Month in July.

Born with cerebral palsy, disability rights advocate Keah Brown's essay collection expands the current conversation about disability and inspires self-love for people of all backgrounds. Brown gives a contemporary and relatable voice to the disabled, who are so often portrayed as mute, weak, or isolated.

Al Etmanski, a disability rights activist whose daughter has Down Syndrome, offers 10 lessons we can learn from people with disabilities, each illustrated with inspiring stories about individuals such as Michael J. Fox, Stephen Hawking, Helen Keller, and Stevie Wonder. Etmanski provides a window into the lives of people with disabilities and the lessons they can teach us.

Nadina LaSpina contracted polio as a child in Sicily. Here she shares her involvement with the Disability Rights Movement, from coming together, organizing, and fighting against exclusion, to the forging of a common identity, the blossoming of disability arts and culture, and the embracing of disability pride.

"Differences are true. Difference is essential. Difference is a fact in the world. In fact, it is the world," writes Mooney, who shares his memories of navigating life with ADD and dyslexia. Mooney advocates for a revolution in the way we think about diversity, abilities, and disabilities.

This much-needed and brilliant anthology, written by authors who identify as disabled, features teenagers with physical disabilities, mental illness, anxiety disorders, or autism. The collection dispenses with stereotypes and celebrates the varied experiences of multi-faceted characters who are not defined by their disabilities.

On Earth, Nolan struggles with a prosthetic leg and suffers from what everyone thinks is epilepsy, but when he closes his eyes, he’s pulled into the mind of Amara, a mute girl from another world. The disabilities of these racially diverse characters are well-researched by Duyvis, who is the co-founder and editor of the website, Disability in Kidlit.

When Jenna discovers her cerebral palsy was caused by an injury at birth, she's furious at her parents for hiding the truth. Can she take back her life before she pushes everyone away? Author Stacie Ramey has done a remarkable job of placing the reader alongside Jenna and her journey to independence.

When Griffin loses Theo, his first crush in a drowning accident, he forges a friendship with his lost love's ex-boyfriend, Jackson, who exhibits suspicious signs of guilt. Griffin suffers from chronic OCD which is central to the story and presented sensitively without sensationalizing the disorder.

Feeling different, especially as a kid, can be tough, but in the same way that different types of plants and flowers make a garden more beautiful and enjoyable, different types of people make our world more vibrant and wonderful. When we come across someone who is different from us but we’re not sure why, all we have to do is Just Ask and get to know their unique abilities!

Cece Bell’s autobiographical graphic novel memoir chronicles her hearing loss at a young age and her subsequent experiences with the Phonic Ear, a very powerful (and very awkward) hearing aid. An inspirational story for anyone who has ever felt a little “different” and a helpful guide for others to understand just what being different really means.

Dusti Bowling’s debut novel tackles limb differences, tic disorders, and Tourette’s syndrome and offers validation to readers who may feel that they are defined by their disability. But as her spunky protagonist, Aven Green, shows, her identity is much more than a disability, and we all need to learn to embrace differences instead of feeling uncomfortable about them.

Inspired by young co-author Libby Scott's own experiences with autism, Can You See Me? is an honest and moving coming-of-age story about learning to celebrate yourself and teaching the world to recognize you, too.

As the number of children diagnosed on the autistic spectrum increases, so does the need for thoughtful and positive representation in picture books. This heartfelt story told from the perspective of a boy on the autism spectrum celebrates the everyday magic of friendship.

In this school-based friendship story that celebrates determination and teamwork, Zulay, who is blind, surprises everyone when she announces that she wants to run a race on Field Day. With the help of a special aide and the support of her three best friends, Zulay does just that.

Inspired by the true story of Rescue and Jessica Kensky, who was injured in the 2013 Boston Marathon bombing, Rescue & Jessica is the story of loving, supportive friendship between a service dog and a girl adapting to her new life as a double amputee. Together they find possibility and purpose – and a way forward, one step at a time.

In this delightful picture book, Charley meets Emma, a girl with limb differences who gets around in a wheelchair, at the playground and discovers that different isn’t bad, sad, or strange – different is just different, and different is great! This is the perfect choice to help kids think about disability, kindness, and how to behave when they meet someone who is different from them.

When a riot breaks out in Milwaukee, medical transport driver Vic is torn between his promise to get his relatives to a funeral and his desire to help his scheduled clients like Tracy, a headstrong young black woman in a wheelchair with ALS, portrayed by disability lifestyle influencer and actress, Lauren "Lolo" Spencer, who also has ALS.

Austistic Owen Suskind was unable to speak as a child until his family discovered a unique way to communicate by immersing themselves in the world of classic Disney animated films. This touching documentary follows Owen as he moves to adulthood and takes his first steps toward independence.

In this award-winning documentary, the parents of a boy with autism form a competitive swim team, the Jersey Hammerheads, by recruiting other teens also on the spectrum, demonstrating the power of inclusion to transcend disability.

Wonder tells the inspiring and heartwarming story of August Pullman, a boy with facial differences who enters fifth grade at a mainstream elementary school for the first time, based on the critically acclaimed book of the same name by R.J. Palacio.