In 1960, Cincinnati took part in a bold experiment to eradicate an epidemic that had afflicted generations of people worldwide: polio. Over the course of eight days, April 25 to May 1, 1960, about 80,000 Cincinnati preschool-age children were taken by their parents to their doctor’s office or to city health clinics to receive a free dose of an oral vaccine against polio, a vaccine new to the United States and not yet licensed for general use by the U. S. Public Health Service.

For the children, the experience was pleasant. Instead of an injection, they received a spoonful of cherry-flavored syrup with drops of the vaccine added. For the vaccine’s creator, Dr. Albert B. Sabin, this campaign was a trial to see if polio, not just the disease but the virus itself, could be eradicated from a large U.S. city, the first such attempt in history.

What led to this momentous event in Cincinnati history?

The threat of poliomyelitis (polio) haunted the minds of American parents throughout the early 20th century. In its worst form, the disease could attack the nervous system causing crippling weakness in the limbs and sometimes complete paralysis. The polio epidemic struck hard at the American psyche because it threatened the very young with death, the prospect of lifelong disability, and in some cases long-term dependence on coffin-like mechanical respirators sinisterly called “Iron Lungs.”

Many parents restricted their children’s activities during the summer due to fear of the infection—swimming outdoors or going to movies were often forbidden. Poliomyelitis, much like present-day COVID-19, often spread furtively, with most of the infected experiencing no or only mild symptoms. But for those who developed the severe paralyzing forms of the disease, the consequences of that silent spread were devastating.

But by 1955, exhaustive scientific research into the polio virus led a New York-based medical researcher, Dr. Jonas Salk, to develop a safe and effective vaccine that used injected inactivated (“killed”) polio viruses to induce immunity. Because the national anxiety about polio had been so great, Salk was quickly lionized as a hero scientist. But his vaccine had shortcomings. Although it prevented the virus from causing disease in those vaccinated, it did not eliminate polio virus from the body, leaving the possibility that the vaccinated could still spread the virus to others. There was also concern that the inactive virus vaccine would not produce long-term immunity. But the widespread use of the Salk vaccine in the late 1950s drastically reduced the number of victims of paralyzing polio.

Dr. Albert B. Sabin, an immigrant from Poland, had come to Cincinnati’s Children’s Hospital Research Foundation in 1939 and would also become head of Pediatric Research at the University of Cincinnati Medical School by 1946. During the 1950s, Sabin had discovered that the polio virus entered the body orally and infected the small intestines. For most people, this caused no severe symptoms, but cases of paralysis occurred when the virus invaded the nervous system. In contrast to the approach taken by Salk, Sabin used active but weakened viruses to make a vaccine which he and most other medical researchers believed would provide a more complete and longer-lasting immunity than the Salk vaccine. In addition, Sabin’s vaccine was taken orally and entered the gastrointestinal tract directly, attacking and eliminating the polio virus where it infected the body. This had the benefit of removing the source of further spread of the disease. 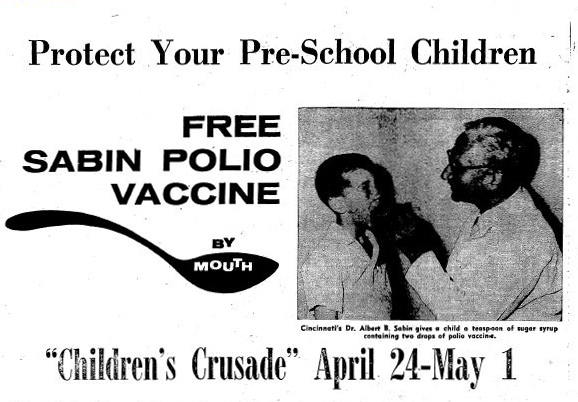 However, the success of the Salk vaccine in the United States and concerns by the medical community that a live virus vaccine might, in rare cases, actually cause the disease, prevented Sabin from conducting trials of his vaccine in the U.S. But he found a warmer reception in other countries. Sabin worked with Soviet scientists to perfect and test the oral vaccine, and it was successfully distributed to millions of children in the U.S.S.R. in 1959. It was also widely tested in Eastern Europe, Mexico, the Netherlands, and Singapore.

The large numbers of people safely and effectively vaccinated with Sabin’s oral vaccine finally convinced the U.S. government to begin to allow preliminary use in the United States, leading to the large-scale clinical trial in Cincinnati. Due to the 1960 vaccination campaign in Cincinnati, the polio virus was eradicated from the city’s population. The next two years saw Sabin’s oral vaccine licensed for use in the United States.

The vaccination campaign in April 1960 received wide support within the medical community and from public health officials. It was carried out jointly by the Cincinnati Board of Health and the Cincinnati Academy of Medicine. Sabin received a grant from the National Foundation for Infantile Paralysis (later known as the March of Dimes) to provide thousands of doses of the vaccine. The board of health provided the cherry syrup. Cincinnati’s parents, however, provided an even greater thing — the trust and courage needed to give their children, and all children, a better future.

Dr. Sabin's archives can be viewed at the University of Cincinnati's Hauck Center for the Albert B. Sabin Archives., opens a new window