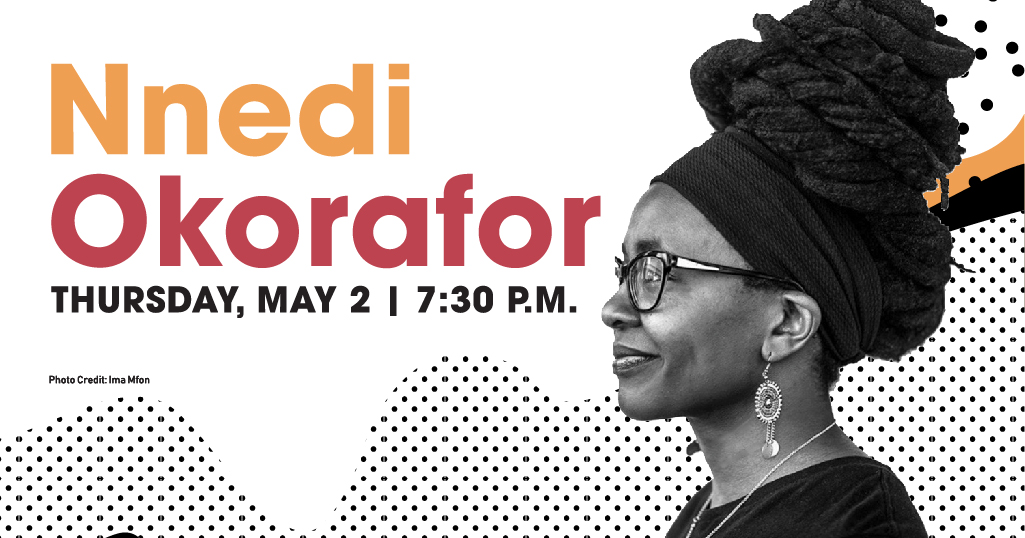 Her work centers on African characters, settings, and mythology. Through this lens, she explores mysticism, technology, immigration, corruption, genocide, and gender inequality.

Nnedi Okorafor was born to Igbo Nigerian parents in Cincinnati. She spent the majority of her childhood near Chicago, Illinois and its suburbs, where she now lives. The family made frequent trips back to Nigeria. Those trips make up some of Okorafor’s most formative memories.

She was a promising basketball and track star, but her athletic career was cut short when she was just 19 years old. A complication from back surgery for scoliosis left her paralyzed from the waist down. Bedridden, she moved her mind when she could no longer move her body and started writing.

After a grueling summer of physical therapy, she was able to regain her ability to walk with the help of a cane. When she returned to college she enrolled in a creative writing course. The rest, as they say, is history.

She began penning her first novel by the semester’s end. She now holds a master’s degree in journalism from Michigan State, a master’s and Ph.D. in English from the University of Illinois, Chicago, and is a graduate of the Clarion Writers Workshop in Lansing, Michigan. 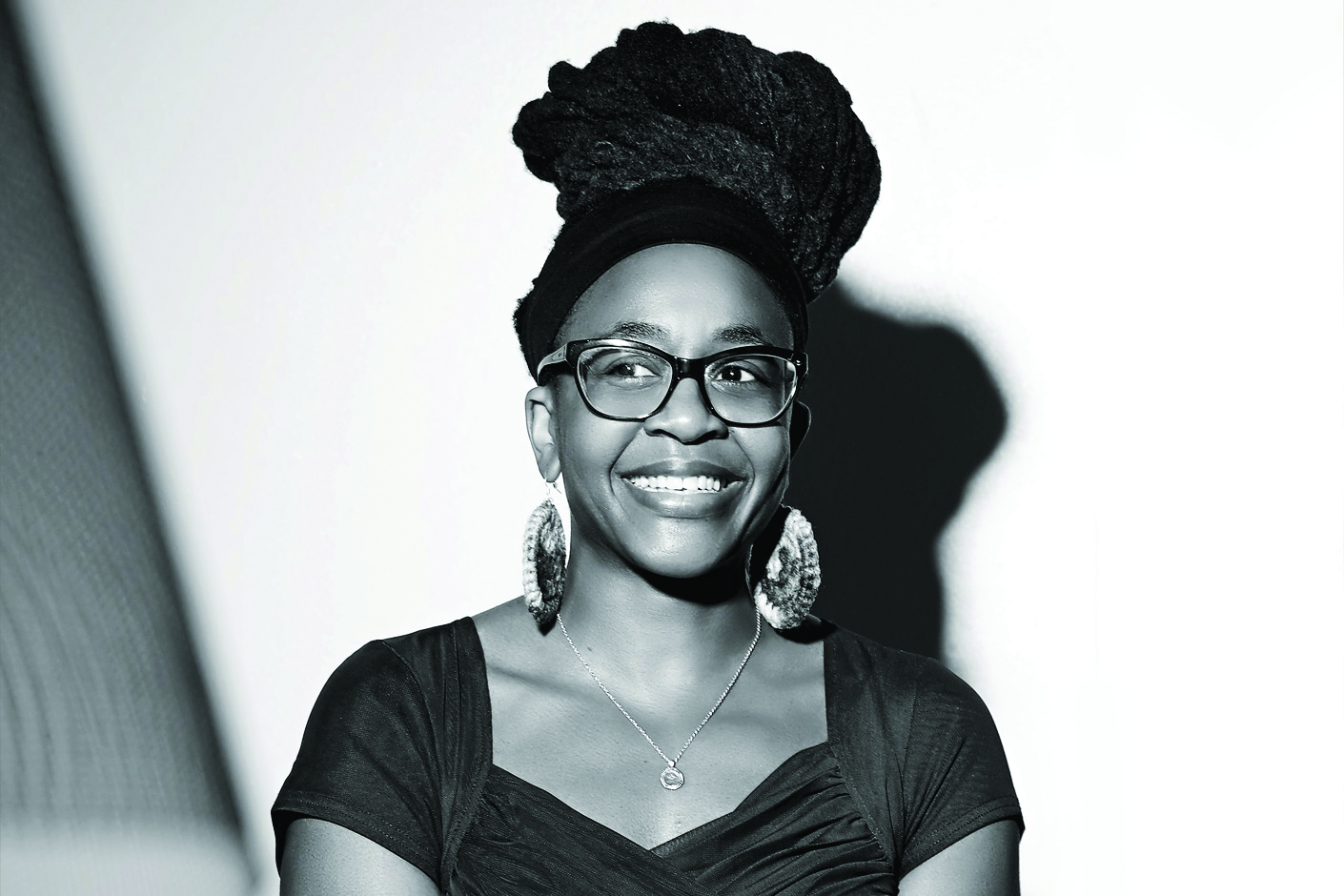 “When I first started writing it was more fantastical and mystical, because that was my worldview, so it naturally manifested itself in that way,” says Okorafor. “Eventually I just started writing straight fantasy because it has always appealed to me. The science-fiction came later.”

She had never really read sci-fi before. While she had an innate love for science, and at one point aspired to be an entomologist, the genre left her uninspired.

On trips back and forth from Nigeria, she began to notice the interplay of technology in the country and how it was different from the US. From cable TV and cell phones in the village to cyber cafés and generators, Okorafor was intrigued by the relationship Nigerians had to these things and how they differed from what she knew in America.

“These early trips inspired me. At one point, especially when I started writing, I was like; well no one else is writing this. I’d love to see this portrayal of Nigeria, of Africa as a whole, in science-fiction. So that led me to start writing it myself. I had this different perspective on things and a different way of seeing. That was the beginning. That was the rabbit hole, and I kind of jumped.”

“It was young adult science fiction with Nigerian mysticism, blended with fantasy and written by a Nigerian American,” Okorafor notes. “I was confusing and many didn’t know how to read me.” 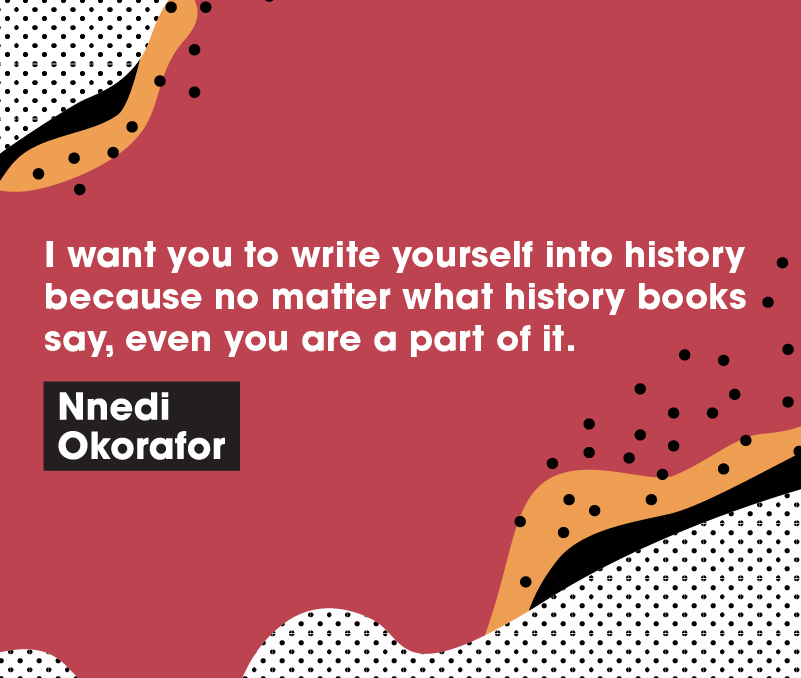 In a genre dominated by straight, white, male writers, she was intent on shaking things up. Now, her works include several children’s books, fifteen novels and novellas, fourteen comics, and nine awards, including the Hugo, Nebula, and World Fantasy Awards.

She has teamed up with Academy Award-winner Viola Davis to create a TV adaptation of Octavia Butler’s Wild Seed, opens a new window for Amazon and is partnering with Game of Thrones author George R.R. Martin on a TV series of her book Who Fears Death, opens a new window on HBO. Nnedi Okorafor has blazed a trail she hopes more and more will follow.

“To people of color writing speculative fiction, I say, tell your story and don’t tell it any other way but the way you want to tell it. Don’t think you have to make it digestible for a Western or white audience. Write it the way you want to write it. Not once did I think I had to tell my stories in a way for others to understand because stories are universal. If it’s a good story, any people, no matter who they are, will enjoy it.”

An Evening with Nnedi Okorafor was made possible by the Eva Jane Romaine Coombe Fund, with support from the Library Foundation of Cincinnati and Hamilton County.