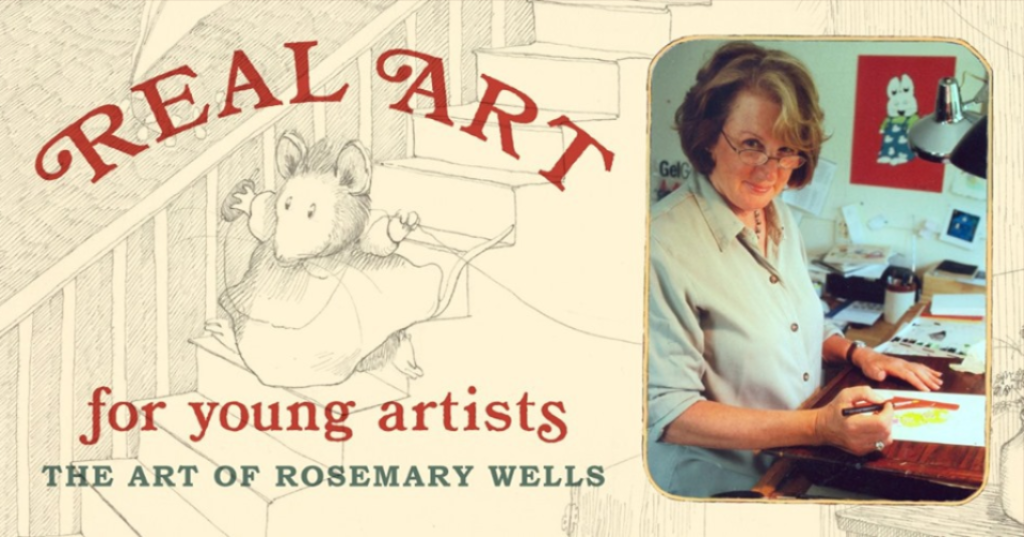 Pajama-clad kittens, bunnies in floral-print dresses, geese with glasses, mice in overalls – enter the world of author and illustrator Rosemary Wells. For some, seeing Wells’ iconic children’s book illustrations feels like a nostalgic reconnection with their inner child. For those not familiar with her work like the Max & Ruby, opens a new window series, especially young kids, it’s like meeting a new friend.

As part of her Real Art for Young Artists initiative, Rosemary Wells generously offered the Public Library of Cincinnati and Hamilton County the opportunity to exhibit more than a dozen of her original drawings from her beloved book Noisy Nora, opens a new window. The art is on long-term display in the Children’s Library at the Downtown Main Library.

Rendered by hand in watercolor, colored pencils, acrylic ink and gauche pigments, each piece of Wells' work brings whimsical creatures to life in a way that allows children to see reflections of themselves. On September 15 at 2 p.m. the exhibit opens to the public. To celebrate the opening of the exhibition, Wells is visiting the Library on that day for a presentation with local illustrator Will Hillenbrand and a book signing.

“Noisy Nora was a watershed book for me in the year 1972 when it was first published,” said Wells. “I have always been a devoted listener to Broadway musicals and could sing every song of every musical in my terrible voice when I was young. From these, I learned meter and interior rhyme and the importance of beat in both song and poetry. Noisy Nora has stood up because children like to recite it. This happens when a poem comes easily onto and off of the tongue.”

Wells is looking forward to children interacting with the art for Noisy Nora, chiefly because it will give them the opportunity to see artwork not done with a computer on a screen, but rendered in pen and ink and watercolor. “They can understand the continuum of telling a story in pictures,” said Wells. “This is important because every good picture book printed in the English language can be read aloud by a non-English speaker who points out the story in the pictures as the pages turn.”

It is Wells' hope that children learn there is a place for them in this world as artists. “Heaven knows, we need them,” she said. “Thoughtful, not showy or trendy. Depictive, not sloppy. Reaching out, not burrowing in. Original to the eye of the artists, not copied from a screen image.”

According to Rosemary Wells’ mother, Wells started drawing recognizable faces and objects, copying them from books and magazines when she was two years old. “I don’t remember that far back,” Wells said. However, she drew all the time. “Over my school years, the other kids would come and ask me to draw things for them. Teachers asked me to show other kids how to do it. I couldn’t. It was instinctive. It was like being one of those children who can play piano by ear without lessons.”

With mighty encouragement from her parents, Wells continued to draw. They’d decided she’d be an artist because that’s what she did best and loved. “In those post-World War II days, girls could hope to be only teachers, nurses or home-makers,” said Wells. “None of these things appealed to me in the slightest. I wanted to be a detective or a major league ballplayer. Not in the cards for a girl in 1950s, so I went to art school.”

While she says she should have chosen Pratt or Rhode Island School of Design where there were plenty of courses for all kinds of commercial artists, she chose a school near Dartmouth, where the love of her life was attending school. “I was going to be an oil painter,” said Wells. “I didn’t think about being an illustrator until long after I entered art school in 1962. I was horrified because all they taught at Boston Museum School was abstract expressionism. I hated that and still have no understanding of it.”

At school, Wells turned to lithography, etching, anatomy, and perspective. After graduating and getting married, Wells took a job in publishing. “I quickly learned an entirely new field: book design,” she said. “This became illustration when I worked for the Macmillan Company in New York at that time with my husband, Tom, at Columbia School of Architecture. One day I prepared a little dummy of a Gilbert and Sullivan song for my boss, Susan Hirshman. She published it and I never looked back.” 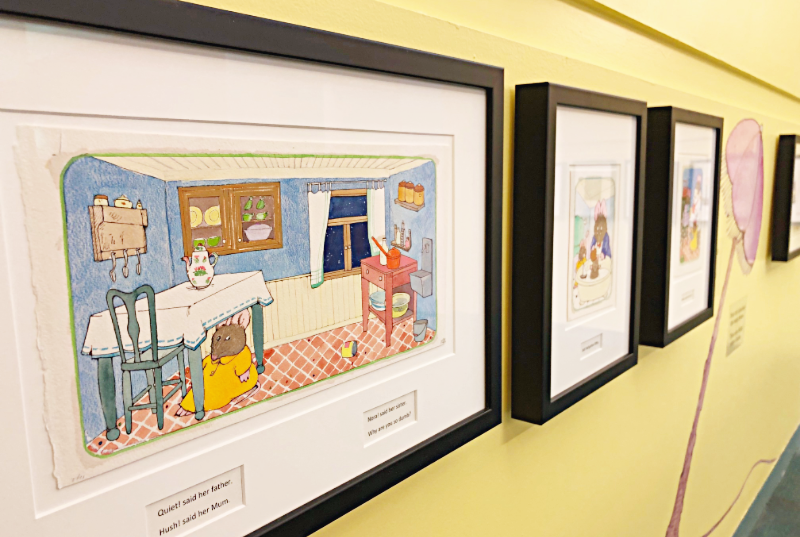 To prepare Wells’ art for exhibition, our Programming, Digital Services, Cataloging, Graphic Design, and Facilities Departments partnered with The Preservation Lab to make sure there was alignment between preservation standards, viewer’s needs, and the artist’s vision.

“At the Lab, approximately 16 pen and ink drawings and one booklet were received directly from the artist as a group within a folder,” The Preservation Lab notes on their blog, opens a new window. “Many drawings were attached to illustration boards with translucent overlays wrapped around from behind, taped into place, giving the feeling as though they were just recently mocked up for production. While not exhibition ready, seeing the artwork in this preproduction state is a rare glimpse into the creative process of the artist!”

Of the creative process, Wells said, “There is no describing a “creative process.” The words creative and process are not copacetic. One is left-brained in origin and the other right. I’m lucky to have enough ideas flying into my mental airport from all over the stratosphere to feed myself excellent texts to illustrate.”

As far as her advice for young aspiring illustrators goes, Wells said the best advice she’s ever received came from an etching and anatomy teacher. “He was an old German printing master, in Boston Museum School, down in the basement, eyebrows full of ink,” she notes. “He pointed upstairs, indicating with a wink the many daubers and plasterers of blobs and incomprehensible scrambled squares. We knew who he meant and we smiled with him. He said, ‘An artist who throws paint at a canvas is painting for the self alone. You, my little chickens, you know how to draw and so you will make art to bring tears to the eyes and warmth to the heart of the world!’”