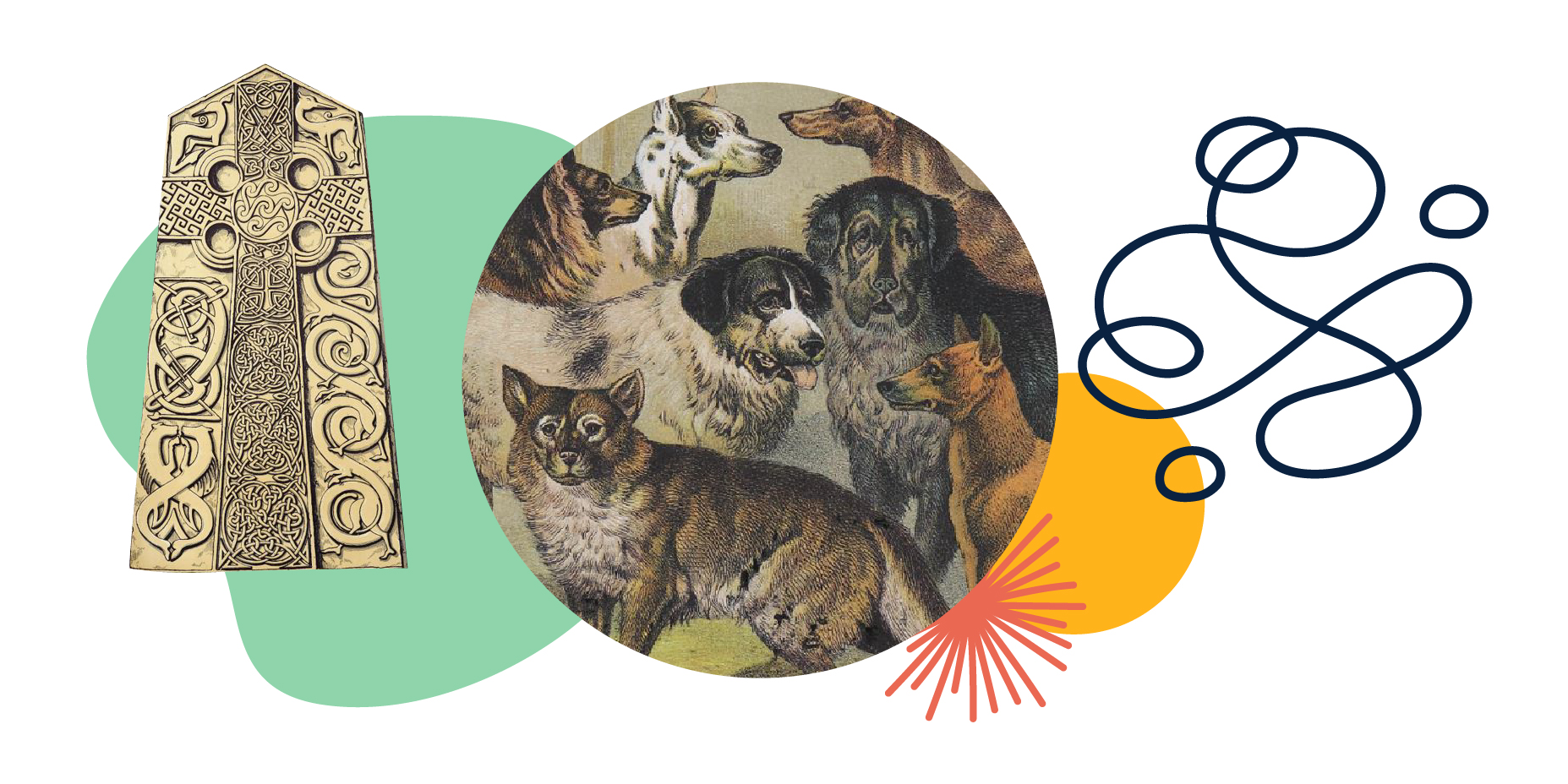 This March 17 we’re raising a virtual pint during the pandemic to celebrate all things from the Emerald Isle, with the help of the Library’s special digital collections.

No one can deny that Celtic designs and symbols are beautifully intricate. Filled with vivid details and colors, they inspired generations of people in Ireland and beyond. Owen Jones, an English-born Welsh architect and one of the most influential design theorists of the 19th century, included a chapter about Celtic design in his Grammar of Ornament. The lavish folio highlights the design principles behind patterns and motifs in architecture, textiles, manuscripts, and decorative arts from diverse cultural periods. It is still in print 150 years later.

Nothing is more Irish than the shamrock. In Flora's Lexicon: An Interpretation of the Language and Sentiment of Flowers, it is described as being part of the Trifolium family of plants, the Latin name for trefoil meaning “three-leaved plant.” The three-part knot is a common Celtic design element “The Dutch clover, Trifolium repens, is dedicated to St. Patrick it being the shamrock of the Irish.”

And according to The Flowering Plants and Ferns of Great Britain, Volume 2, “The Shamrock has been worn by the Irish for many centuries on the seventeenth of March, which is the anniversary of their patron saint, St. Patrick … in the Gaelic dictionary, published by the Gaelic Society, under the word seamrog, many plants are mentioned.”

Plus, the shamrock-filled green hills of Ireland are perfect for walking along with a four-legged friend, and there are plenty of Irish canines to choose from for a jaunt. According to Johnson's Household Book of Nature: Containing Full and Interesting Descriptions of the Animal Kingdom, the Irish greyhound was once used for hunting wolves, which were exterminated in Ireland in the 1700s. It then describes the Irish setter as a breed that’s “fast and enduring, and works beautifully.” The book’s description also states that the information between its covers is based upon the writings of a group of eminent naturalists, including our own John James Audubon. 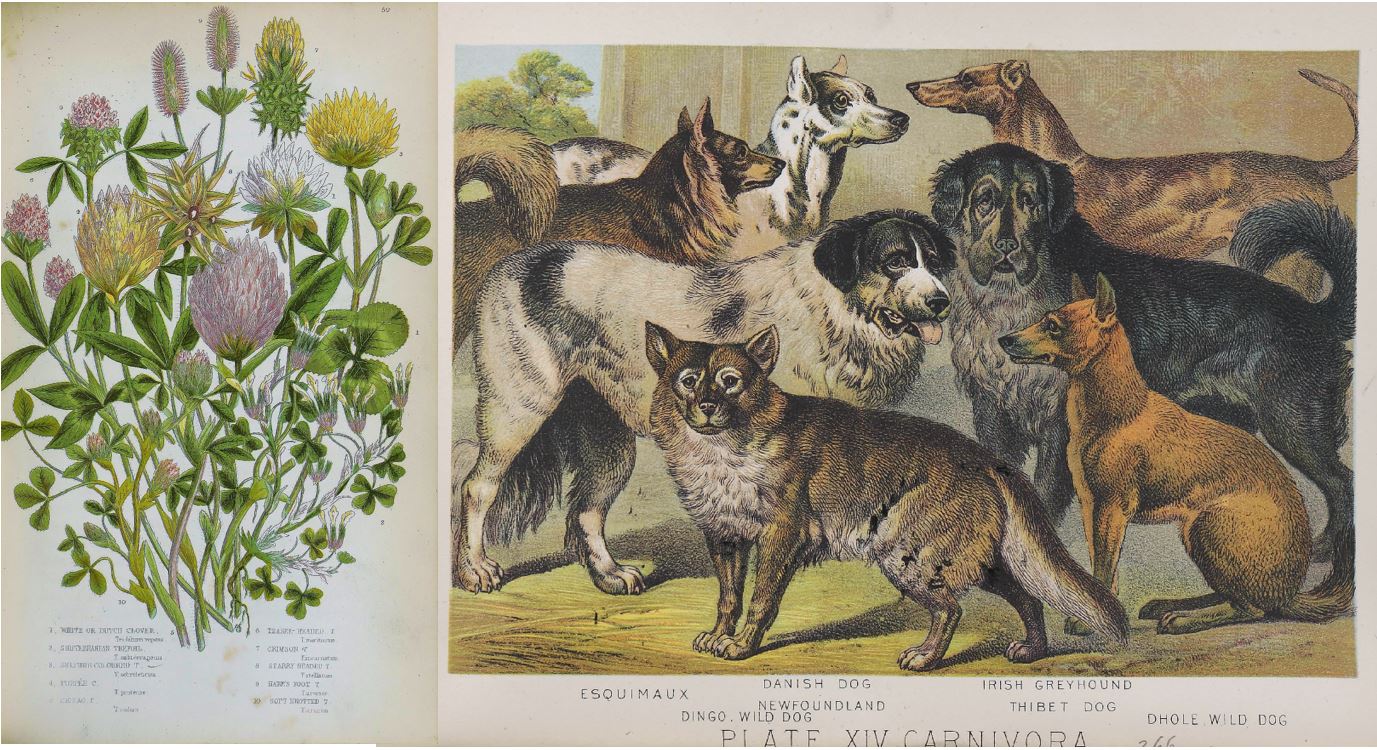 In Celtic cultures, a bard was a professional storyteller, verse-maker, music composer, and oral historian. Two notable Irish authors have connections to Cincinnati.

The first, Lafcadio Hearn, was born in Greece to an Irish father and from the age of 2 spent his formidable years in Dublin. After immigrating to Cincinnati, he became a reporter for the local newspapers as well as writing the weekly journal Ye Giglampz. Even though he is best known for his later life in Japan and all the books he wrote about Japan’s culture and mythology, Ireland is still proud of their native-born son. A fact proven by Irish Ambassador Daniel Mulhall’s visit to the Library to see our Lafcadio Hearn Collection.

Another famous Irish writer, Oscar Wilde, visited Cincinnati three times in 1882 as part of a nationwide speaking tour. Mementos from those visits as well as Oscar Wilde’s career can be found in the Digital Library’s Oscar Wilde In Cincinnati Collection. Of special note is the 1888 book The Happy Prince, a collection of short stories for children that is autographed by Wilde to Irish scholar John Pentland Mahaffy reading, “…from his old pupil the author.”

The history and mythology of Ireland inspired many musical pieces, including some performed by the Cincinnati Symphony Orchestra, as noted in their yearbooks. Some of the pieces staged at Music Hall included “The Garden of Fand” by Arnold Bax, a London-born composer with Irish parentage, who was inspired by the Irish mythical daughter of the lord of the ocean. Another piece, “Fervaal” by French composer Vincent d’Indy, was based on the legend of the son of the Celtic king of Cravann.

The most famous book in Ireland is the Book of Kells, an illuminated manuscript of the four Gospels from the New Testament of the Bible. The illustrations and ornamentation combine traditional Christian iconography with the ornate swirling motifs typical of Insular art, also known as Hiberno-Saxon art that originated from the Irish monastic movement of Celtic Christianity. Figures of humans, animals, and mythical beasts are shown alongside Celtic knots.

While the original Book of Kells resides at Trinity College Library, Dublin, the Library owns an exact replica that lives in the Cincinnati Room at the Downtown Main Library. Once the Cincinnati Room is open again for in-person visits, the public can come to see the book for themselves, just like McGing Irish Dancer Paige Graf did a few years ago.