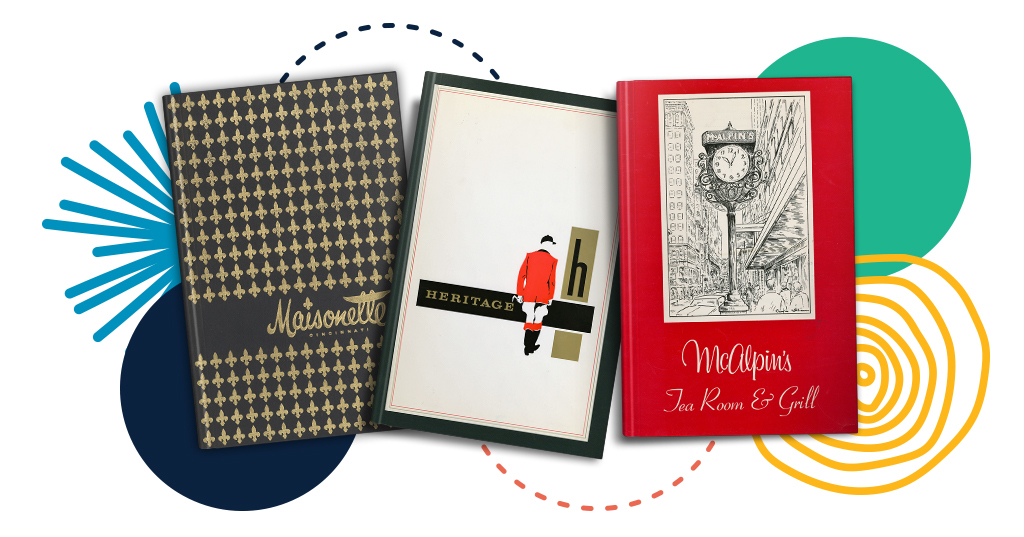 Since 1979, gorging oneself at the Taste of Cincinnati over Memorial Day weekend has been a local tradition. Originally held for one day in Piatt Park (across the street from the Main Library!), the event gradually grew to larger crowds over three days at different locations.

Due to the pandemic, the 2020 Taste of Cincinnati was a virtual event. According to the event’s Facebook page, it “had previously been moved to July 3-5, 2020, will again be postponed. The postponement is due to measures in place to stop the spread of COVID-19. We hope to be able to announce a new date as soon as possible.”

In lieu of celebrating Cincinnati’s cuisine scene in person, I decided to do it virtually with the Library’s digital menu collection from now-defunct favorites, such as the Maisonette, Pigall’s, the Heritage, and the Gourmet Restaurant at the Terrace Hilton. I’ve also awarded some of the dishes I came across with my version of the Taste of Cincinnati’s “Best” awards usually handed out. These are not official in any way, they’re just the dishes I would use a time-traveling DeLorean or Tardis to go back and try. 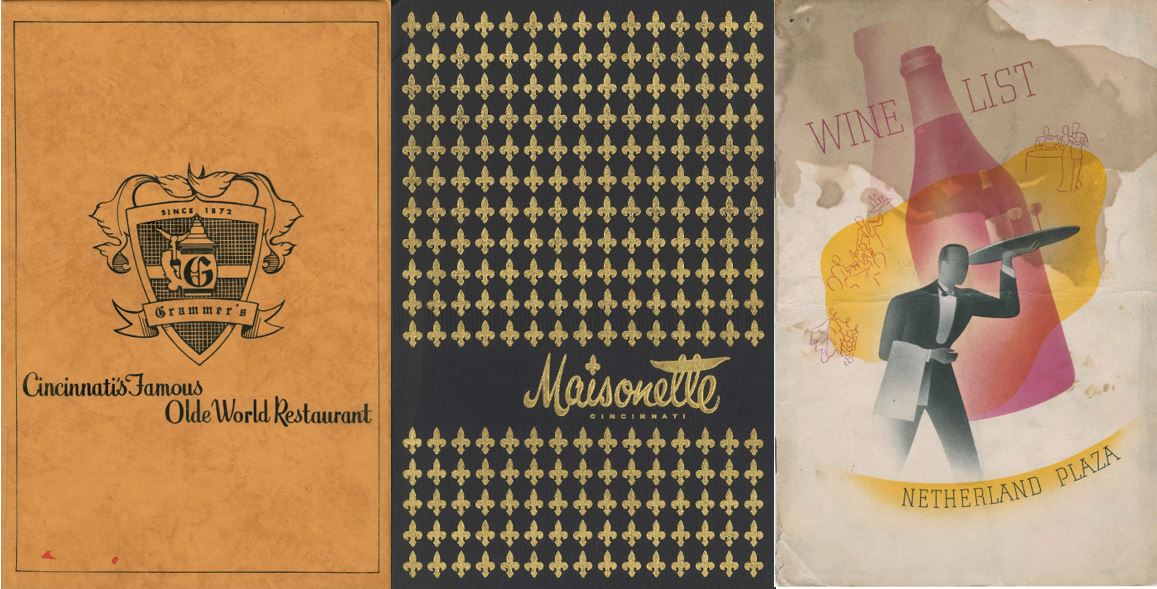 Third: The Diner on Sycamore offered snow peas on its burgers and sandwiches.

Entrees I Wish I Could Have Tried

There's a Side You Don't See Anymore

Desserts Someone Should Bring Back

The Rookwood Pottery Restaurant’s burgers named after local figures, including the McGuffeyburger, the Shillitoburger, the Erkenbrecher burger, and the Boss Coxburger. Of note is the fact that Boss Cox’s former estate now houses the Clifton Branch Library.

You learn so many curious things going over old menus. For instance, I had no clue (pun intended) that Reds player Ted Kluszewski once had four restaurants in town called Jack and Klu’s Charcoal Steak House. Also, I had no idea how prevalent things like tomato juice, grapefruit sections, celery sticks, cottage cheese, were for appetizers. Plus, anything featuring this newfangled Jell-O.

There seemed to be a lot more German- and French-themed food restaurants. It wasn’t unusual to spot schnitzels and chateaubriands, even ion eateries that didn’t specialize in Old World food. Favorite drinks seemed to be buttermilk, Sanka, and Postum, a powdered roasted-grain beverage popular as a coffee substitute. The caffeine-free beverage was created by Post Cereal Company founder C. W. Post in 1895 and marketed as a healthier alternative to coffee.

Also, everything old is new again. Avocados saw popularity back in the day that almost mirrors today’s avocado toast. And we may think having food delivered with a GrubHub or DoorDash app is super modern, but there was a restaurant delivery service called Dinner Dash (circa the 1980s-90s) whose motto was "Bringing the restaurants to you!" It served the Downtown, Clifton, Hyde Park, Norwood, Kenwood, Blue Ash, Montgomery, and Indian Hill areas.

I hope you’ve enjoyed this trip down memory lane. If the food didn’t strike your fancy, I’m sure the "good old day" prices did. Who knows, maybe a future chef or restaurateur can find some inspiration in these digital pages.