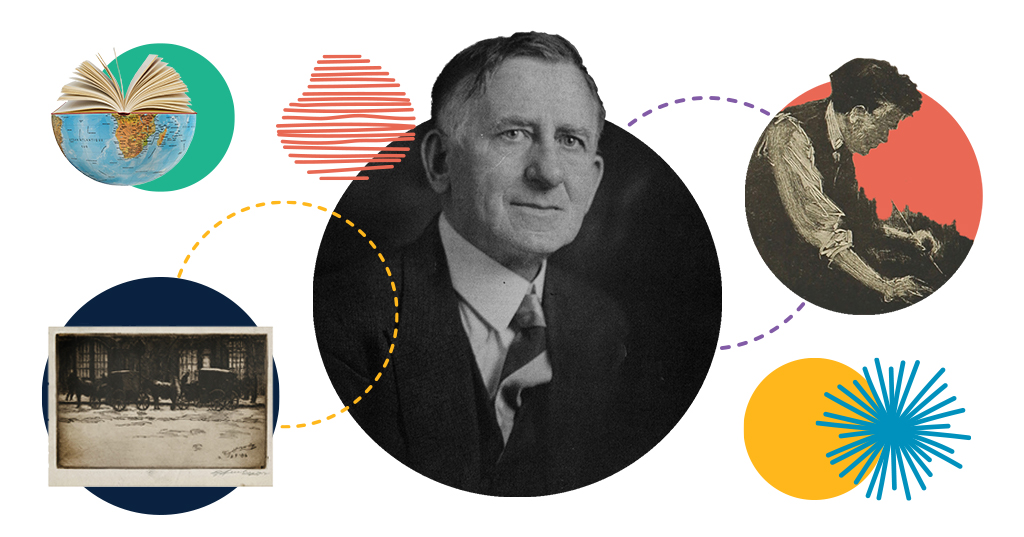 At a time when it was fashionable for artists to travel abroad for inspiration, Cincinnati native Edward Timothy Hurley found all the subject matter he needed at home. Perhaps best remembered for his etchings that so captured the spirit of a fading, older Cincinnati, Hurley worked in multiple mediums and left behind an enormous body of work.

Born in 1869, Hurley was the son of Irish immigrants and one of seven children. His decision to pursue art didn’t come until after he had graduated from Xavier College in 1887. It was a visit to the 1893 World's Columbian Exposition in Chicago that inspired him to attend evening classes at the Art Academy, where he studied painting with renowned artist Frank Duveneck. Impressed by his pen-and-ink drawings, Duveneck suggested that Hurley try his hand at etching, and proceeded to teach him the complicated processes involved in creating a print.

Hurley went to work as a decorator at Rookwood Pottery in 1896 and remained there for 52 years. He painted landscapes and nature scenes on ceramic pieces, winning a gold medal during the St. Louis 1904 exhibition. In 1907 he married Irene Bishop, a fellow decorator at Rookwood, and the couple bought a home on St. James Avenue in Walnut Hills. It was on the third floor of this house that Hurley set up his own printing press, once owned by the notorious counterfeiter Charles Ulrich, and began printing his etchings.

While Hurley painted scenes from nature on ceramics during the day, the etchings he created at home were of local scenes, especially in and around Mt. Adams. He created these works primarily as a way to boost his income, and they sold so well that he eventually created over 2,000 of them. Commercial prints were in high demand at this time, and Hurley’s were snapped up by a fast-growing urban, entertainment-seeking class who wished to fill their homes with flattering images of their hometown.

The Art of Etching

Etchings are drawings made on copper plates coated with shellac or wax. The artist uses a stylus to scratch through this coating to expose the plate beneath. The plate is then dipped into acid, which eats away at the exposed areas to create depressions that later are filled with ink. It's a process similar to darkroom photography in that certain areas are masked, or given less exposure time, to create lighter and darker tones across the resulting image. When the exposure is finished and the shellac is wiped off the plate, it's then inked up for printing. There are different ways to ink plates, so Hurley was able to create different versions of his images. Here are two different prints of a scene titled “Sixth Street East of Vine Street.” 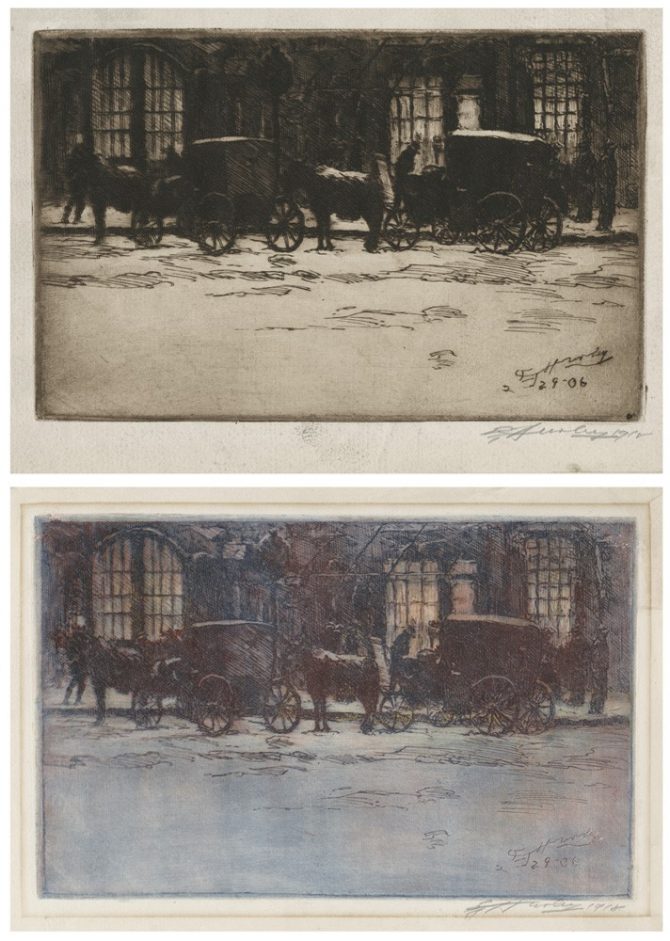 Despite managing two artistic careers, Hurley managed to spend his weekend afternoons painting for pleasure in the hills of Kentucky. It was this activity that he did purely for his own pleasure. He also created some bronze works, and for a time produced his own crayons and etching powders. He regularly opened his studio to artists and visitors and loved demonstrating his press for curious onlookers.

The complexities of his long career are perhaps best summed up by Elizabeth R. Kellogg in her intro to the 1916 book The Town of the Beautiful River.

“The pictures have been a labor of love through many years of study and are records made in fugitive hours taken from the artwork of another sort. Mr. Hurley, in time as methodically applied as that of any businessman, has created those dream landscapes for which Rookwood is best-loved by many people. But his sense of the beauty of the actual scenes which lie about him in his native town — peculiarly rich and varied in material—has kept his tireless energies forever on the stretch to explore and to revisit them in all kinds of weather and to set down his impressions.”

Explore the works of E.T. Hurley in the Digital Library.

The Etchings of E. T. Hurley