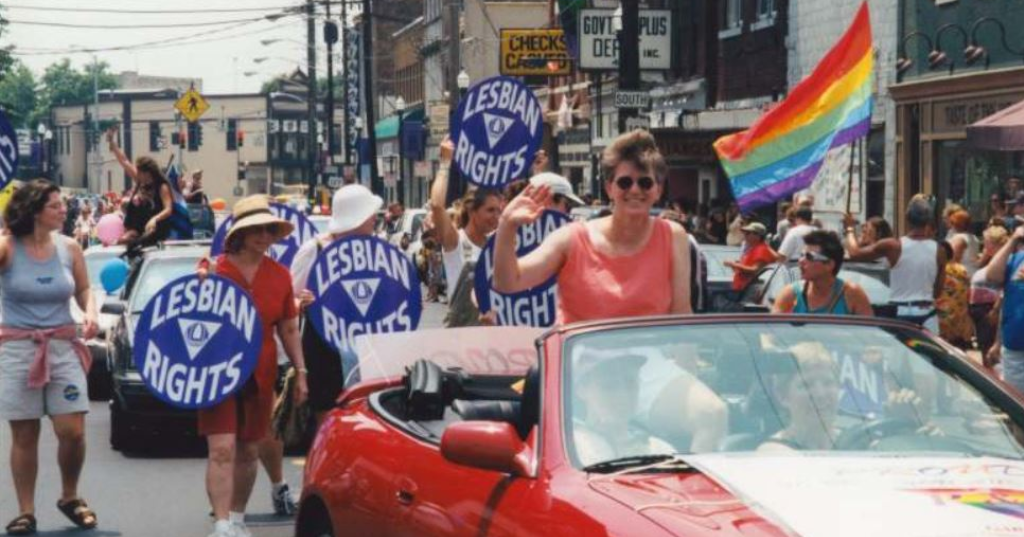 In the late 1970s, the Crazy Ladies Bookstore in Northside was a safe haven for lesbian and queer women in Cincinnati. For many LGBTQ+ people at the time, it was the only place they could buy books, pamphlets, and other literature that actually depicted their lives.

A community organization and local newsletter called Dinah formed around this time. One of its leaders, Phebe Beiser, worked tirelessly to connect the local lesbian and queer community through event calendars, personal essays and columns, and advertisements for local LGBTQ-friendly businesses in the publication.

Dinah printed and archived its own materials and collected other regional materials such as LGBTQ-related flyers, pamphlets, periodicals, and novels. In 1989, Beiser and fellow Dinah editor Victoria Ramstetter turned the growing, donation-based collection into the Ohio Lesbian Archives , opens a new window(OLA) on the third floor of the Crazy Ladies Bookstore.

Visit OLA and Browse the Collection

When the bookstore closed in 2002, the Ohio Lesbian Archives moved into the basement of the Clifton United Methodist church in 2006, where it has been for the last 14 years. Researchers, librarians, historians, students, and any member of the public are invited to look at the collection any time by appointment (although the OLA is currently closed due to COVID-19 precautions until state restrictions are lifted).

Buttons, banners, photos, and other ephemera line the tiny library’s walls, which preserves the rich history of a minority community and is nearly outgrowing the space. The OLA website states, “More than a reference library, OLA is evolving into a museum with trophies, political buttons, statues, a labyris (sic), and gay history card games.”

Interestingly, it is the only collection of its kind in the Tristate region, and one of only a handful of lesbian and queer archives in the country. Materials from the Ohio Lesbian Archives have been used in exhibits by the Public Library of Cincinnati and Hamilton County and were an important resource for the recently released book LGBTQ Cincinnati by Ken Schneck.

OLA Past Events and Future Plans for Partnership

In addition to housing their collection, the Ohio Lesbian Archives facilitates events, film screenings, and discussions, both virtually and in-person. Last year, the OLA hosted their 30-year anniversary party in September, and have continued to do virtual events through quarantine in 2020.

In June, the organization held a virtual discussion of the 2012 Jim Hubbard documentary “United in Anger: A History of ACT UP,” which you can view for free on Kanopy with your Library card. This lo-fi political documentary describes the inception of the AIDS activist movement around the 1980s through firsthand oral accounts and rare footage. The film’s website states, “… the film depicts the efforts of ACT UP as it battles corporate greed, social indifference, and government neglect.”

See some additional resources provided below:

The discussion group noted the film’s similarities to current social movements and discussed the protest tactics shown, such as protest performance art and “die-ins.” They also talked about the importance of smaller affinity groups representing individual groups within the movement, and the necessity of archiving information.

Looking forward into the next year, the Ohio Lesbian Archives intends to continue virtual programming and film screenings and when safely possible, in-person events. The organization is also accepting volunteers. The Public Library of Cincinnati and Hamilton County aims to form a partnership with the Ohio Lesbian Archives for recurring displays, lectures, and presentations of rare materials.

Visit OLA’s website at ohiolesbianarchives.wordpress.com, opens a new window for information about the organization, viewing the collection, or volunteer opportunities.