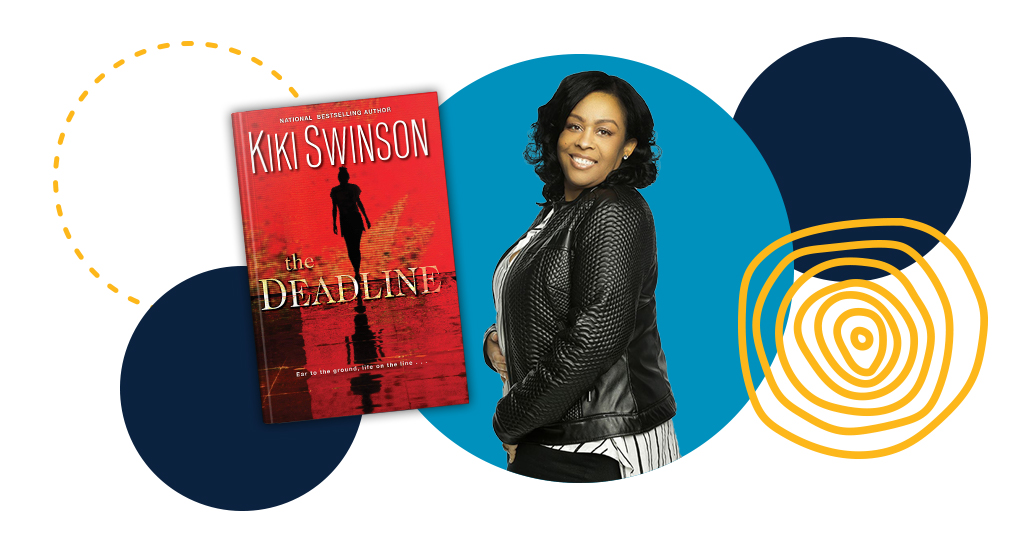 The Library's Urban Fiction Book Club meets virtually on the last Thursday of the month, and you're invited! The Feb. 25 meeting will discuss The Deadline by Kiki Swinson. In preparation for the club's February pick, book club member Tasha Campbell interviewed the author herself.

Author Kiki Swinson is from Portsmouth, Va., and developed her passion for writing while serving a five-year sentence at a federal prison for “being the wifey” of a person who was selling drugs. The official charge was “knowing of and/or about a criminal-enterprise.”

After being released in December 1996, Swinson learned about the success of Black women authors like Terry McMillan and Bebe Moore Campbell. She figured if they could do it, so could she. Swinson went on to self-publish Mad Shambles, followed by Wifey, published by Melodrama Publishing.

Tasha Campbell: How did you feel when Wifey became a bestseller?

Kiki Swinson: When Wifey became a bestseller, I swear, I couldn't believe it. I mean, I knew I had what it took to write a good book, I just didn't believe that it would actually happen and I would garner fans!

TC: Do you base much of your character development on your own life experiences?

KS: Wifey was about my life. Kira was actually me. Everything I wrote about Kira was the same thing that happened to me. The only thing I changed in the book, was that I went to prison, whereas the character Kira didn't go. I made it that way so that I could write an entire book series.

TC: Do you ever get writer’s block?

KS: Writer's block happens to me when I try to start a new book. There are so many urban books out now and everyone is writing the same kind of story. So, what I do is, I'll come up with an ending, write it down, and then I'll close my laptop for a couple of days and two to three days later, I’ll have an awesome book idea.

TC: How did you discover that you had the gift to write?

KS: I discovered that I had the talent to write when I was serving five years in federal prison on a drug trafficking charge.

TC: What inspired you to write the novel The Deadline?

KS: I came up with the story idea for The Deadline because I love watching the news, especially CNN. It was just a fresh idea and something new to write about.

TC: Will there be a sequel?

KS: Yes, there will be a sequel for it. It's called Public Enemy #1. My readers are gonna love it!

TC: Does it take a lot of effort for you to keep your audience engaged from beginning to end or it is just an active imagination?
KS: No, it doesn't take much effort to keep my readers engaged. The way I do it is by challenging myself to create a story that's hard to figure out until the very end of the book.

TC: Do you have any more novels in the works?

KS: Yes, I'm working on the prequel to an old series I wrote called Playing Dirty and Notorious. The prequel is Playing with Fire.

Join the Urban Fiction Book Club, currently meeting monthly via Zoom, by visiting our events page or by calling 513-369-6900. Book club selections are always available to cardholders—no waiting, no holds!